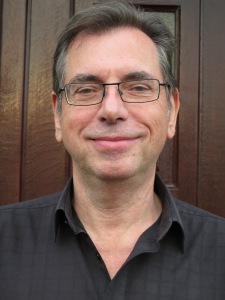 It has been my honour and delight to chair the short story session at the festival since 2016. These days Debbie and I together draw up the list of authors to be invited to read at the short story session.  As organiser of Stroud Short Stories, the twice-yearly live lit event for Gloucestershire and South Gloucestershire writers, I’ve read quite a few short stories by members of the local short story community and seen a large number of authors read/perform in public. The short story authors who read at HULF are re-shuffled annually with new faces each time to help keep the session fresh.

As well as the readings, Debbie had arranged for Dr Gerri Kimber, the Chair of the International Katherine Mansfield Society, who had, only an hour earlier, provided an engrossing talk about New Zealand’s doyenne of short stories, to speak about the short form at the end of our session.

This year I was able to persuade local authors Kate O’Grady, Nastasya Parker, Mark Rutterford, Chloe Turner, Steve Wheeler (aka Steven John) and Katie Witcombe to read/perform their stories at HULF. I must say, they didn’t take much persuading! I received an immediate ‘yes please’ from all six of them. These are all writers whose work I respect enormously. They had all read at Stroud Short Stories and all have gained publication and international short story competition success. It was the first time as a performer at HULF for Chloe, Kate, Katie and Steve.

We had the 1pm slot in the festival programme and I had warned the authors not to expect a large audience, as we were competing with a panel discussion, a lecture, a workshop and lunchtime! I was amazed that in fact we had the largest turn-out to date with nearly every seat in the hall taken.

Each story was to a maximum of five minutes, leaving enough time for a quick story from me and a lovely finale from Dr Gerri in which she touched on the current state of the short story, the relevance of Katherine Mansfield to contemporary writing and generously predicted successful writing futures for the writers she heard.

As well as Gerri’s talk on Katherine Mansfield, I was also able to attend the Official Opening of the Festival with some thought-provoking words from Brad Borkan and some wonderful readings by local children, together with the Best of British session featuring a number of very accomplished authors reading from their novels.

It was 3pm before I realised I hadn’t eaten lunch but that’s how it goes at HULF. There are sessions I felt compelled to see so my stomach had to wait.

As ever the organisation of the Festival was amazing. The range of lectures, panel discussions and readings was quite extraordinary. These were provided free for the Festival by the authors involved, all of whom whole-heartedly support Debbie Young’s efforts in creating this annual event in the South West literary calendar which has now gained ‘unmissable’ status.

To find out more about John Holland and his wonderful stories, visit his website:  www.johnhollandwrites.com

To find out more about Stroud Short Stories, visit: www.stroudshortstories.blogspot.com

With thanks to John for allowing us to share the story he read at HULF this year, which was first published in the National Flash Fiction Day Flash Flood Journal (June 2017):

It is too hot to walk. The sun has rendered the day harsh and distorted. Bleached it of its softness. They flee the starkness of the stubble field. Head for the river. And are cooled by its deep swell and the purple shadows of overhanging trees.

The smell of wild garlic seeps into them. In places the river bank gives way to rough tracks leading to the edge of the water. They step down to peer into the river’s surge.

“I’m going to lie on the grass bank in the shade,“ he says.

“I’m going in,” she says, thrilled at the idea.

Already without stockings, she sits on the bank and removes her shoes. Stands and places one foot, then another, in the river. Feels the ooze between her toes.

He sits up on both elbows to watch. “You ARE mad,” he calls.

She takes a few more steps. “Come on in,” she shouts.

He continues to watch her.  She begins to walk slowly upstream, away from him. And is aware of the strength in her calves and thighs as she strides on. The river splays around her thighs.

The water is deeper – nearly to her knees. She lifts her green cotton skirt. Then stumbles on a rock and loses her footing. He sees her lurch before steadying herself.

He shouts to her, but the water drowns his call.

He stands and moves to the river’s edge. Sees her in the distance moving purposefully away from him, a V of water following her. He imagines her walking mile after mile into the open sea.

She turns and begins to walk back towards him, feeling the power of the river against the front of her legs. She is laughing uncontrollably.

When she reaches the bank he holds out his arm for support, as she strides from the water.  She is shivering, laughing, out of breath.

“That was amazing,” she says.

He says nothing. As they walk up the bank into the bright day, she holds her skirt so that it doesn’t fall onto her wet legs. Still in sight of the river, they lie on their backs on the grassy slope. She breathes deeply, her white legs apart, bent at the knees, dripping river water, feeling the sensation of the sun on her wet skin as something familiar, yet intensely sensuous. The air tastes and smells like that of her youth. She imagines that they are 18 years old. Discovering each other, testing their nerve. It is as if all the years of their marriage have never existed.

Still grounded next to her, he moves on to his side. His face is close to hers, shielding it from the sun.

“I guess we’ll talk about everything when the kids are back at uni,” he says, searching her face.