This week’s guest blogger is novelist and poet Mari Howard, author of the excellent Mullins Family Saga series, Mari took part in the inaugural Hawkesbury Upton Literature Festival and has  been a staunch supporter ever since.

My piece for the ongoing HULF Festival blog is vintage Hawkesbury LitFest – Shakespeare’s birthday (when else?) 2015.

We arrived in Hawkesbury mid afternoon, left our luggage at The Fox Inn, and went to find HULF founder Debbie Young. Soon we were in her garden, behind her delightful cottage (which must have inspired her Sophie Sayers cosy mystery series!), drinking tea, along with fellow festival Indie writer John Lynch. The sun shone and it was very cosy (for outdoors in late spring) and not too mysterious. 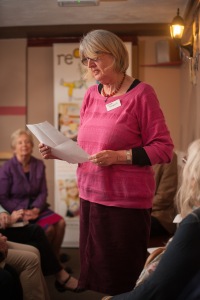 The evening (HULF 2015 was just an evening event) then began in the marquee, set up in the garden of The Fox. Various of us writers read from our work, to an audience of other writers, members of the Hawkesbury writers’ group, and other local residents. I think this was my first “Reading from my work” in front of an entirely unknown audience, and I wasn’t nervous – the whole thing was fun. Trying to remember who was there, I think I recall Ali Bacon, and I definitely recall Ellie Stevenson, (who was also staying over at The Fox), and of course John Lynch who we’d met earlier. Also Caroline Sanderson from BBC Radio Gloucester, and Lynn Pardoe whom I sat next to.

As the evening cooled and twilight took over, the event moved into a long room at the rear of The Fox itself, used for receptions. A larger audience had gathered by this time, I’d have been able to view some of our books in the small ante-room area, and also some delightful drawings of dragons and other fantasy characters by Sophie Tallis.

We had an encouraging address from Katie Fforde (President of the Romantic Novelists Association ). And since we were all independent authors, we also heard from Orna Ross, founder of ALLi (the Alliance of Independent Authors*). Orna read some of her poetry and talked about the background to ALLi. Our revels ended, the evening was brought to a close by Michael  MacMahon performing Prospero’s closing speech from The Tempest, which has now become a tradition. (*affiliate link)

Next morning, a few of us who had stayed over, including Ellie Stevenson, joined Orna and her husband and Debbie for coffee and a chat at the Bodkin, just down the road from Hawkesbury. This was the defining moment, in a way – the festival hade been a great success, and it was definitely in the calendar to happen again.

A prophetic journey home from the Festival for Mari Howard

The rest, as they say, is history. But looking back, I feel enormous affection for that small, cosy, HULF. Symbolically, as we drove home, we found ourselves following a library van – next year, 2016, the larger all-day HULF, with cafe, children’s books section, visual art, and poetry all added, was opened from the local mobile library.

Literally the launch vehicle for HULF 2016!

Debbie Young kicks off HULF 2016 from the steps of the mobile library, with Clare Carter from BBC Radio Gloucestershire