Before Covid-19 scuppered Hawkesbury Upton’s plans for a special commemorative  event of VE75 Day in and around the village hall, we had booked a stall to stage a mini-festival of books inspired by World War II.

Six HULF authors were looking forward to sharing their books and their experience with visitors. Although they now can’t be here in person, we’d still like to share their books with you, which would all make great reading as we mark this special day. 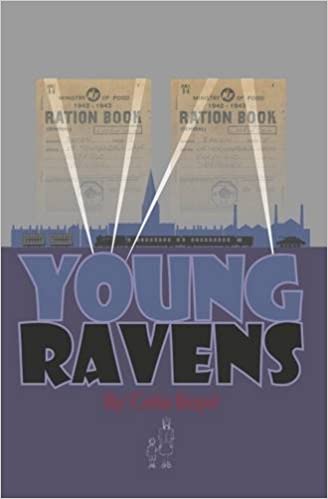 Celia Boyd‘s Young Ravens  tells the story of a young girl and her little brother during the Second World War, When her parents divorce, Sheila and her brother are sent by her solder father (who has custody of the children) to live with her grandparents in Sheffield, Sheila must adapt fast and learn to accept and thrive in her new circumstances. 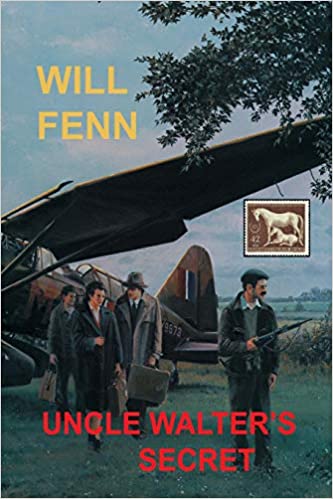 “A thrilling tale of intrigue, history, passion and covert operational planning based on real events around World War 2” – reviewer on Amazon

Hawkesbury author Wiliam Fairney, best known for his books about engineering and engineers, as diverted from the usual engineering theme of his books to pen a history book called Uncle Walter’s Secret (published under the pen-name Will Fenn), an exciting tale of intrigue, espionage, torture, loyalty, betrayal and retribution based on true events. 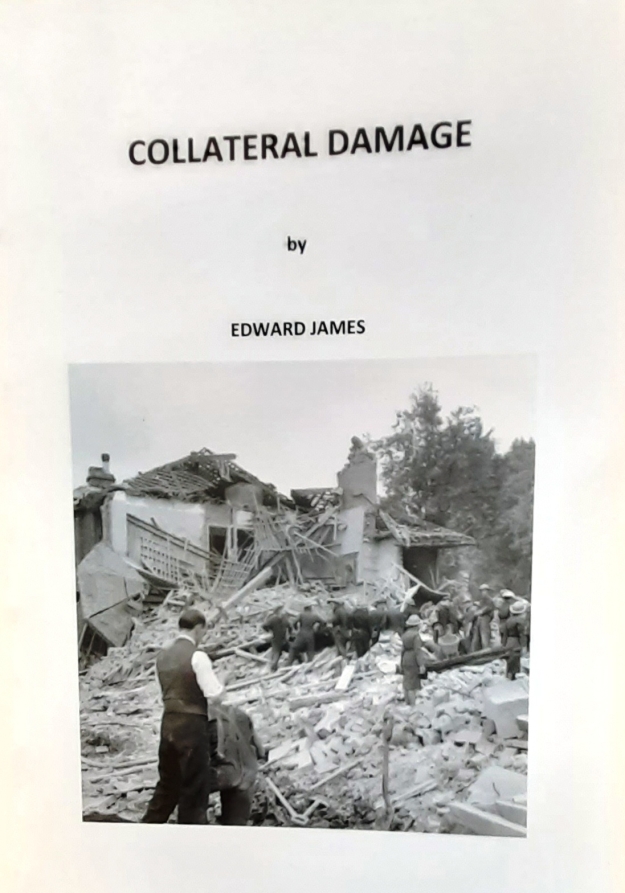 A personal memoir in prose and verse

Edward James, who has previously brought his historical novels set in Tudor times to HULF (read his guest post for the HULF blog here.), was planning to bring Collateral Damage, his personal memoir of growing up during the Second World War. It is a short collection of five short prose pieces and two poems, which, Edward says, “are not about the horrors of war but about growing up in a world which seemed normal at the time and was quite mad by today’s standards”.

A limited private print run means that copies are only available directly from the author, so if you would like to buy a copy, please contact HULF and we will pass your order on to Edward. 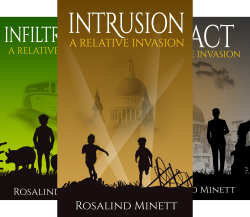 Like Edward’s memoir, Rosalind Minett‘s war-time trilogy, series title A Relative Invasion, is more about the characters than the events. Her compelling and powerful story of conflict and competition between two very different cousins is a psychological drama that just happens to be set during the war. However it brings vividly to life the experience of living in London suburbia and then being evacuated to the countryside during the war years. The three books in order are: Impact, Infiltration and Intrusion.

Through the Eyes of a Teenage Girl 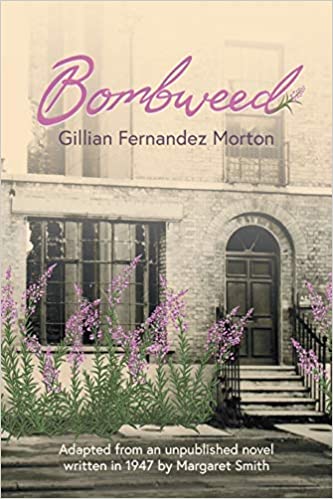 The Second World War through the eyes of a teenage girl

The story behind Bombweed is an interesting one. It was originally written in 1957 by Margaret Smith, the mother of Gillian Fernandez Morton and Maureen Armstrong, drawing on her own experience of being a teenager during the Second World War. However in the aftermath of war, when the nation’s focus was on building a bright new future, publishers declared they were not interested in books harking back to those dark days. In 2018, Margaret’s daughters decided it was time to share it with the public, and edited it for publication for a 21st century audience. It offers fascinating insights into the effect of the war on teenagers and on women in general.

Click here to buy it as a paperback or ebook. 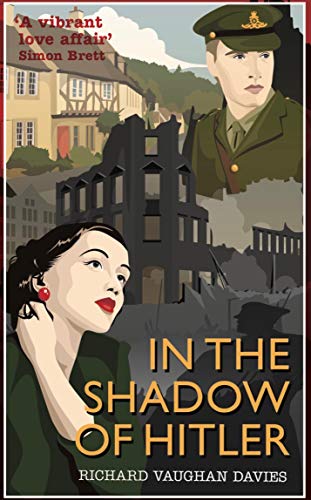 Although Richard Vaughan-Davies‘s thriller In the Shadow of Hitler is mostly a story set in the immediate aftermath of the war, focusing on the affair of a British lawyer working in Germany with a local woman, but it tells a much wider story through flashbacks to the war, and also earlier, addressing the impact on one man, Adam, of the rise and fall of Hitler,  even into Adam’s old age. This compelling and thoughtful novel also provides one interpretation of the rumour that Hitler fathered a child by Unity Mitford, bringing the Cotswolds also into the story. A fascinating, evocative and intelligent read.

Order your copy in paperback or ebook here. 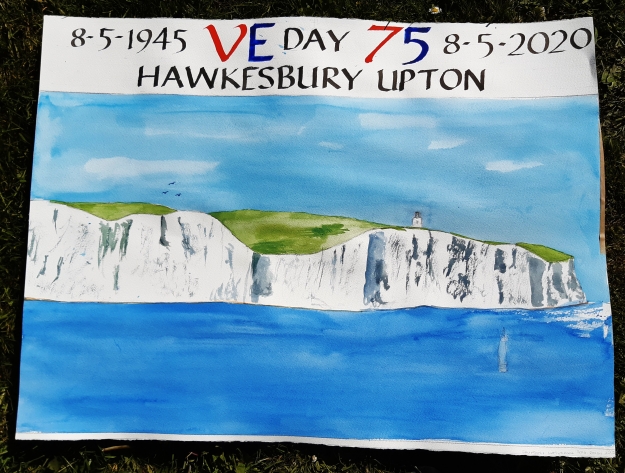 Whatever you are doing on this special day, HULF sends you its very best wishes. 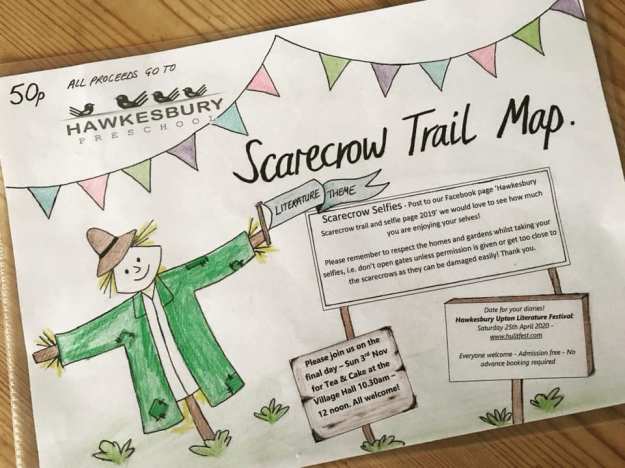 Thanks to the organisers for kindly adding a “save the date” note about HULF 2020!

When to Walk the Trail

Just come along any time between now and Sunday 3rd November to enjoy a lovely walk spotting 31 scarecrow displays throughout the village, all with “Literature” as their inspiration.

On the final day of the trail, there’ll also be tea and cake in the Village Hall from 10.30am-12noon. (Not much happens in Hawkesbury Upton that doesn’t include tea and cake!)

A Wet and Windy Start

After the trail was officially launched yesterday at the community library in the Village Hall, the scarecrows faced a wet and windy night, but have survived more or less intact. Although Gangsta Granny‘s wig blew away, she has now been reunited with it! 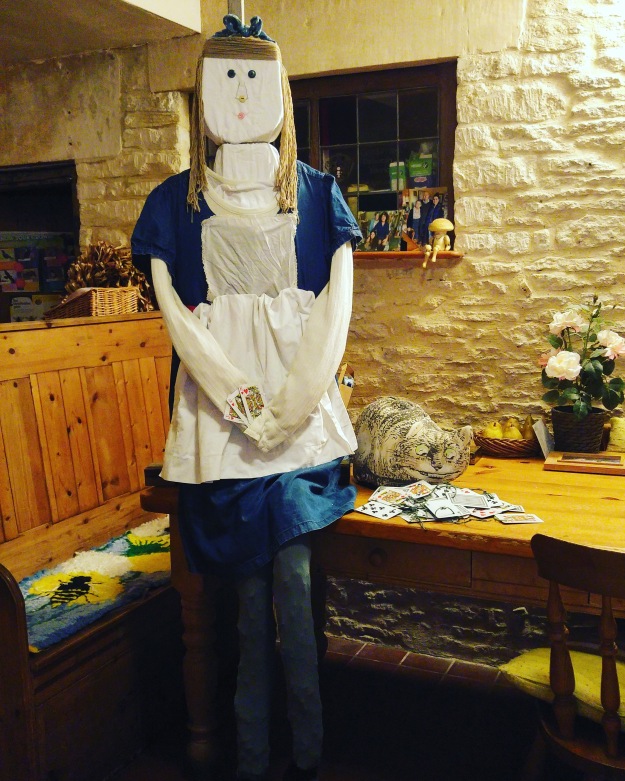 No surprises about HULF Director Debbie Young’s contribution to the trail – a larger-than-life Alice in Wonderland!

And here’s the flip side of the flyer, showing you the trail to follow. You can pick up a less crumpled version when you visit – or just stroll round the village and let the scarecrows take you by surprise! 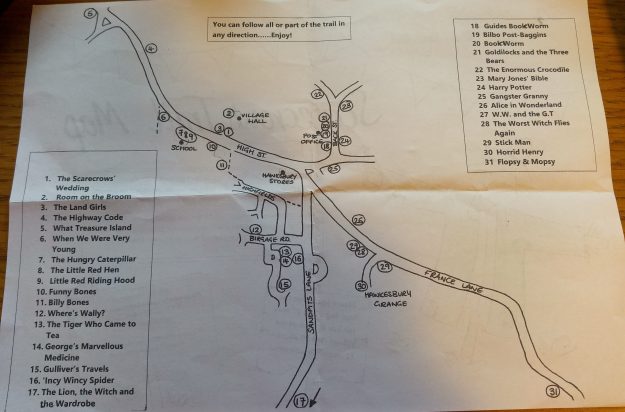 For more information – and a growing collection of photos – check out the Trail’s Facebook Event page here.

With thanks to Hawkesbury Preschool for organising the event and for promoting HULF 2020 on the map),  to Louise Roberts for founding the tradition a few years ago, and to all the villagers who have worked so hard to put on a good show – just what we need to brighten up the dark autumn days!