The delights of HULF began even before I arrived at Hawkesbury Upton.  What a soaring view over the Severn valley as we drove along the Cotswold Edge, along a road never travelled, although I have lived in Gloucestershire for over a decade! It was a cold, windswept day (our rotary dryer blew away during my absence) but marvellously clear.  And that was before I discovered Hawkesbury Upton, a delight in itself.

I arrived in time for the opening ceremony and laid out my books on the display table.  Alas, nearly all of them were still there at the end of the day.  After the readings from the schoolchildren’s poems and Brad Borkan’s inspirational speech, I followed Brad across the road to listen to his stories of the Heroic Age of  Antarctic exploration. I am writing a feature article for the Historical Novel Society on historical fiction with a Polar setting, so I booked Brad for an interview later in the month. 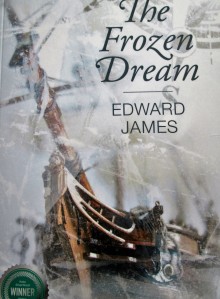 A novel set in Arctic Russia

After a leisurely lunch at one of the two local pubs I listened to Rod Griffiths and Lois Parker give their poignant presentation on dementia before taking another break to chat with other festival goers at the school and the Methodist Chapel.  Then it was time for the literary tour ‘Around the World in 8ish Books’ at the Bethesda Chapel. My 15 minute slot was on Arctic Russia, introducing my novel The Frozen Dream, an adventure story about England’s first contact with Russia in the 16th century.  I read the passage where the ships first meet the pack ice.

Not that I write exclusively about cold places.  Freedom’s Pilgrim is set in Mexico and I am currently writing Beyond the Big River, which begins in Texas (the Big River being the Rio Grande).

And so to the closing ceremony and collecting my unsold books.  At least they earned me a place on the HULF programme, which is one of the things which makes being an author worthwhile.  Thank you Debbie for making it possible.

Edward James is a review editor for the Historical Novel Society and has published two historical novels, The Frozen Dream and Freedom’s Pilgrim.  He is retired and lives in Cheltenham.  See more on https://busywords.wordpress.com/about-myself  .