In the build up to the wonderful Hawkesbury Upton Literature Festival 2019 I faced several challenges:

Fortunately, our chair, AA Abbott, made the preparation for the panel session ‘Novels Inspired by the Day Job’ a lot less daunting than I had anticipated by expertly briefing Wendy H Jones, Susan Grossey and myself, including checking whether we worked for the police or were criminals.  How closely did events described in our stories relate to what actually happened in a previous manifestation? Given my book features fraud, deception and big money wielding power I was careful to steer clear of the dark and secret past when discussing day job experiences.  I was very grateful that we had active audience participation during the event, which helped break the ice so well, and there were also plenty of questions afterwards.

Later in the afternoon, again in the Bethesda Chapel, I read an extract from my book alongside eight other authors under the caption ‘Around the World in 8ish Books’. Listening to the others read was great as there was so much diversity and depth in performance and subject matter. It was uplifting and fitting that the final reading was by Debbie Young herself!

I was so lucky to be appearing in not one but two events and, after lunch at The Fox Inn, it was clear that I was not going to be able to attend the panels and talks and see all the authors I wanted to in the day.

I did, however, manage to catch an informative session ‘Beware of the Ghost (writer) and Other Publishing Trade Secrets’ featuring Rachel Amphlett, Edward Weiner and Katharine E Smith.

Rachel’s title of ‘authorpreneur’ demanded attention and she exuded ideas and creative energy; she also possessed a mine of tips for fledgling writers. Rachel told us how she combined a full-time day job with creative writing, publishing and marketing. On her daily forty minute commute to Brisbane, Rachel was able to find an end-of-carriage seat (the advantage of the train starting at her stop), set up for her writing and ensure nothing preventing her from hitting her daily word target before breakfast time; in the evenings she attended to publicity, promotions and correspondence.

Rachel left us in no doubt that producing only two books a year was slacking. She advised that we should have been working on the third book by the time we were ready to publish the first one; this sent me away from Hawkesbury Upton at least planning the second one but realising I’m about two books behind where I should be. Time to put the skates on.

Hugh Arthur has worked and lived in Paris, Istanbul, Madrid, Edinburgh, London and now lives in Cheltenham. He has travelled extensively in the Middle East. ‘No More Water’ is his first published book and draws particularly from his experiences living in Istanbul and Madrid. More crime novels with an international flavour will follow. For more information about Hugh Arthur and his books, visit his website: http://www.hexfordhouse.co.uk

Full disclosure: until I became e-friends with Debbie Young, I had never heard of Hawkesbury Upton – let alone its literature festival.

When Debbie started mentioning it, I realised that it was my chance to meet her in person and to attend a free book festival – which is a rare beast these days, with most such events charging upwards of £10 per session ticket.

I felt a bit bad about just turning up as a spectator and so I asked whether I would be any use as a speaker, thinking – arrogantly – that I would be doing a little festival something of a favour. Once I had been accepted and gathered into the HULF family, I quickly realised my mistake: this is a prestigious and well-attended event, and I was jolly lucky to make it onto the programme at all. 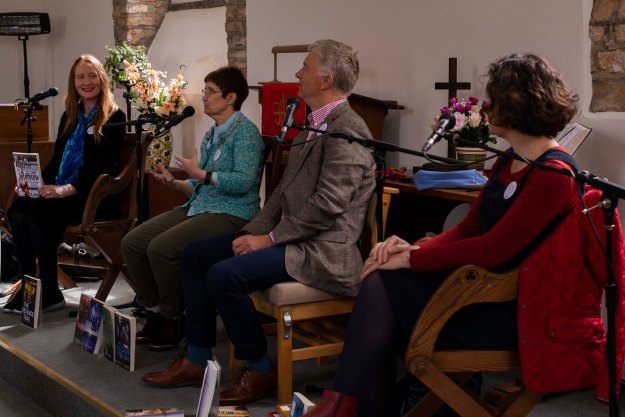 Susan, seated on the right, was part of the “inspired by the day job” panel, with AA Abbott, Wendy H Jones and Hugh Arthur. (Photo by Angela Fitch Photography)

The panel session in which I took part had as its theme “authors inspired by their day jobs”, and I found myself sitting alongside an accountant (AA Abbott), a former military nurse (Wendy H Jones) and a commodities trader (Hugh Arthur) – so with me as an anti-money laundering consultant, we were certainly an eclectic bunch. Oddly enough, we are all crime writers (that nurse can think up some dastardly murders…) – and money laundering has featured in books by each of us, so perhaps I am not quite the trail-blazer I had imagined myself to be!

What was common to the three panel sessions I attended – one as a participant and the other two in the audience – was the generosity and fair-mindedness of everyone concerned.

There was no grandstanding, no “I’ve got a three-book contract and you’re only a beginner”, and no barging into anyone else’s spotlight. The audience questions were sometimes predictable but often so thought-provoking that everyone fell silent for a few moments as the answer was considered – and I really like that evidence of true connection with, and deep interest in, the books under discussion.

The fabulous organisation of the HULF was quite something to behold, with locals obviously incredibly supportive of the initiative. The village has an impressive selection of suitable venues, including a brace of lovely chapels, and with a bespoke map and excellent signposting we were all dashing around with true purpose – with a packed programme, no-one wanted to miss a moment. The Wonderland Café was a marvel, and the volunteer-staffed bookshop gave all authors equal status and marvellously prompt payment. And there was even a professional photographer on hand, with a special deal for HULF authors dreaming of needing a head-shot for that Booker Prize publicity material.

Applications to feature in the HULF 2020 line-up will open on 1 September 2019 and I urge you to note the date in your diary: it’s an inspiring and invigorating day – and even if you don’t know anyone at the start of the day, I guarantee that by the end of it you will have made some firm friends.

The story so far… the first five in a planned series of seven Constable Sam Plank historical mystery novels.

Susan Grossey is the author of numerous non-fiction books about money laundering and – more thrillingly – the Sam Plank series of historical crime novels set in London in the 1820s. There are five already published, with the sixth due out in October 2019 and then one more to complete the series. After that, unable to contemplate life without a Regency constable, Susan has planned a series of five novels set in her home town of Cambridge, and narrated by a university “bulldog”.